How to Teach Bravery to Your Child 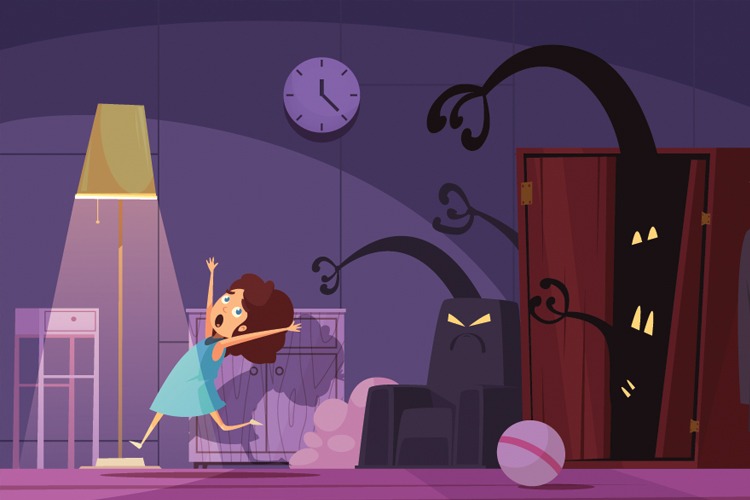 teach bravery to your child

We admire our fellow human beings who have demonstrated bravery, so naturally we want our children to act bravely.  But what does it mean to live life from a stance of bravery?  And what ways of parenting our kids will help them become brave – or keep them from showing bravery?

Here’s a challenge for you:  name five times in your life when you acted with courage.  Chances are that you have to think about that for a moment.  You may never have run into a burning building to rescue someone, you may never have confronted a person with a gun, but might you have stood up to injustice you saw occurring, even though people were going to disapprove of you?  Might you have faced the truly scary aspect of looking into yourself, especially aspects of yourself that you don’t like?  Some experts divide bravery into three types:

The more that we can recognise bravery within ourselves, the better we understand it — and the more we can recognise and encourage it in our children.  So the first task in growing brave kids is finding all the places we ourselves have demonstrated this strength.  And here’s the first hint:  you will be more likely to find these places in your life if you can start sentences with “I faced . . .” rather than “I avoided . . .” You also might like to consider the kind of company that Bravery keeps.  Let’s look at what goes with it. 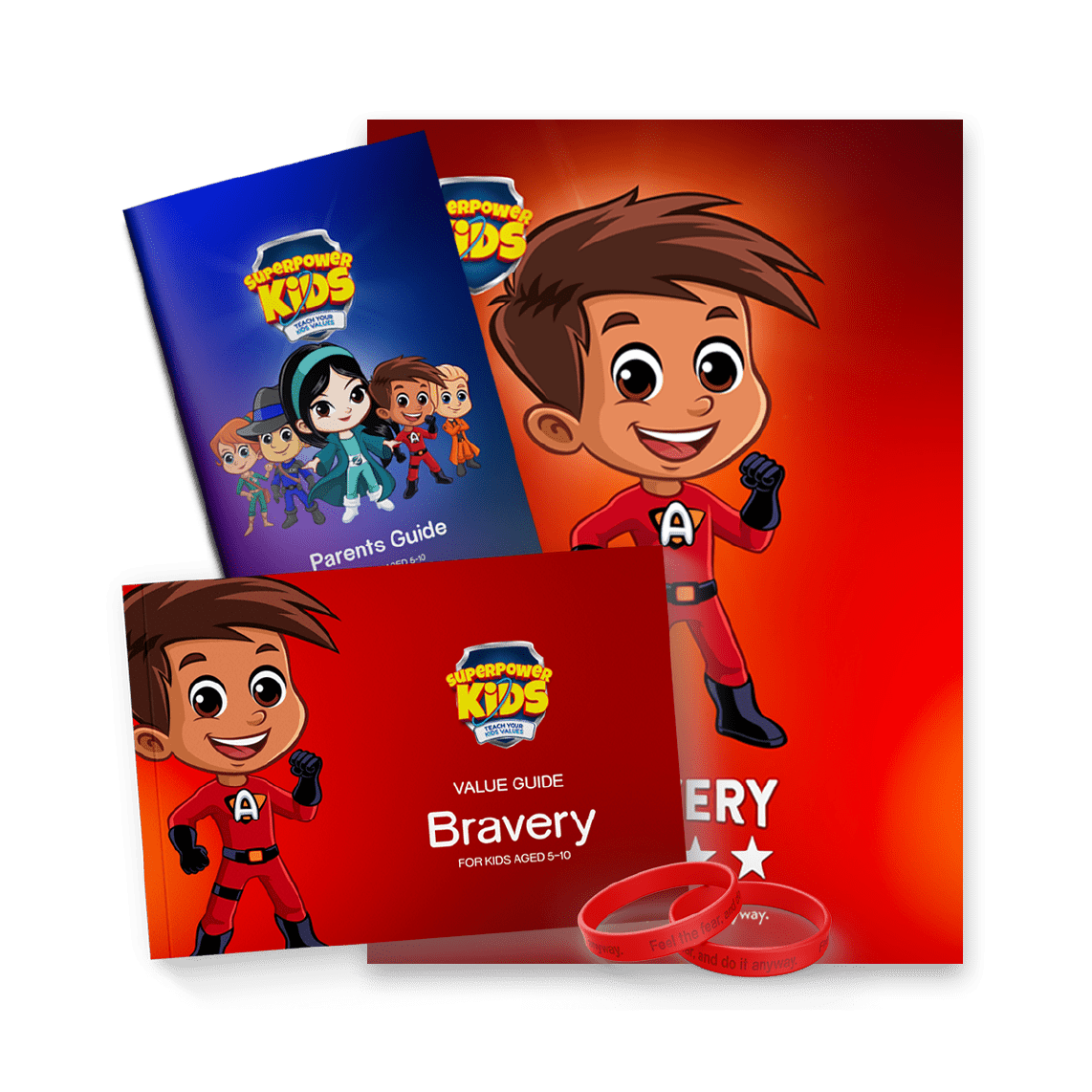 Follow Archer on his journey and teach your child the value of Bravery.

What traits co-occur with bravery

The VIA Institute on Character names bravery as a strength within the virtue category of courage, one of six overarching virtues that subcategorise the 24 strengths a person could have.  Courage describes strengths that help a person to exercise their will and face adversity.  The other strengths in the courage category are honesty, perseverance, and zest.  This means that, the more you are acting honestly, “keeping on keeping on” despite setbacks, and moving ahead with enthusiasm, the more likely you are to be acting from a strength of bravery (VIA Institute on Character, 2020).

Parenting ways that help or hinder bravery in kids

The Superpower Kids Program helps parents consciously and deliberately train their children in values that are important to them.  Direct training is a valuable means of shaping our children to realise their potential, becoming the human beings we wish and deeply know that they can be.  At the same time, we need to recognise another silent but potent factor working on our kids:  the unconscious influence of our own attitudes, beliefs, and behaviours on them.  For better or worse, we may verbally communicate the idea, “Do as I am saying”, but if what we are doing is incongruent with what we are saying, communication experts tell us that the non-verbal message (including here our actions) speaks more powerfully than words ever can.  Looking at bravery, particularly, what are some of the parenting ways that either hinder children from becoming braver, or help them act more bravely?

To illustrate, let’s take the example of nine-year-old John and his mother.  There’s a special market day happening in his town and John and his mum decide to attend.  Once there, John sniffs the aroma of food being sold at one of the stalls and begs his mother to buy him some of it.  “No, dear”, says Mum. “We shouldn’t buy food from a market stall.  It might make you sick to your tummy”.  Once they get home, it is starting to rain.  John is excited to see the rain, because it doesn’t rain much in their community.  He tells his mum he’s going out to play in the rain.  “No, dear,” says Mum. “You can’t go out to play in the rain; you might catch a cold.”  John sits down to do some homework; he does it in a different style than usual.  When he is finished, his mother looks it over and tells him to go back to the old style, even though his answers are correct.

Now, we can ask, what has happened to John today?  In every instance when John has attempted to bravely explore something new, he has been thwarted in the attempt by his loving, well-meaning mother.  She is also strictly controlling his homework effort.  Even if his mum were trying to consciously teach him to be courageous in trying new things, her high level of protectiveness and control would speak volumes against such efforts.

Of course, parents must protect their children against genuine dangers; that is the parents’ job!  But if John is constrained from new experiences merely because of his mother’s irrational fears, it will be hard for him to become a “change master” (stepping out of the comfort zone) or “embrace the unknown” (following his intuition in a new situation) that would greatly aid his growth in bravery.  He simply will have absorbed, mostly unconsciously, the notion that life is dangerous, and one should never take a risk.

Seven-year-old Mary’s father loves and wants the best for her, setting high standards.  Most children would walk over hot coals to please their parents, and Mary is no different.  She gets near-perfect grades at school, does well on the sports team, and is a model daughter at home.  But then Mary tries a few things that don’t go so well.  Perhaps she gets a mediocre grade or makes a big error in a sports performance, and her father harshly criticises her.  In Father’s book, anything less than perfection must be corrected, and Mary incurs huge disapproval for not “succeeding”.  In fact, over the years Mary comes to understand that she is “loved” mostly when she does well; she does not feel loved just for the person she is.

In this case, we must ask:  how likely is Mary to “stick her neck out” – confronting the fear and doubt that are likely to precede a decision to act bravely – when “not being perfect” has already carried such huge, negative consequences for her?  How much is Mary likely to persevere if she has a setback, when there is no guarantee of a perfect outcome?  You guessed it:  not likely at all.

The combination of high standards without the warmth of emotional support is a perfect breeding ground for a lack of self-confidence and incapacity to act with zest, perseverance, and conviction because acting bravely is just too risky.  The sad part is that Mary has learned to become timid rather than brave, because indirectly, her father has taught her the value of timidity:  a safer course for maintaining that all-important approval.

Superpower point:  As parents, our attitudes and actions speak louder than our words, so we need to ensure that these match the values we are trying to instil.

Bolstering bravery:  A role for curiosity, trust, support, and openness

You wouldn’t be reading this if you didn’t love your child and want to help them achieve their best.  If you wish to model attitudes and behaviours which value bravery, here are some possibilities.

A spirit of curiosity and open-mindedness

When children see that their parent is open to new experiences and maintains an attitude of curiosity, it gives them permission to step into new arenas and explore them, despite the scariness of the unknown.   You might consciously model this by suggesting adventures to do with your child.  Holidays to new areas, eating heretofore untasted cuisines, and trying new sports or other pastimes together all communicate that it is safe to step out of our comfort zone and try to do things for which there is no guaranteed outcome of perfection or success.  When you and your children try new, possibly difficult things together and children see that — regardless of outcome, you love them and yourself just as much as before — their trust in the process of bravery can grow.

Giving permission to be imperfect clearly communicates that failing – or at least not obtaining a perfect result – is ok; it signals learning.   That your child attempted something that was at the edge of his competence, pushing his limits, is to be celebrated.  If it doesn’t go to plan, you have a teachable moment for bravery:  a chance to have an empathetic, supportive conversation about what may have gone wrong, and what can be learned for future.  Children can be reminded that insufficient “failures” means that they haven’t been brave enough to undertake projects at the top of or just outside their range of competencies.

Be open about your own fears

Do you need to (politely) confront your neighbour about a problem he’s causing?  Are you scheduled to give a talk or perform some other task publicly about which you are somewhat anxious?  Children shouldn’t observe out-of-control panic on your part, but if your children see that you have some trepidation about undertaking a given task – and then see that you “feel the fear and do it anyway” – they have powerful modelling about the reality of bravery:  it hardly ever comes without a bit of fear.

In the situation of your own trepidation, you can allow your kids to hear you giving yourself a “pep talk”:  the positive self-talk that gets you over the line to doing the task, and shows your children how we can literally talk ourselves into bravery.  You might even invite them to help you come up with a phrase to repeat to yourself (a mantra) to bolster your confidence going into the situation.  Then watch their confidence grow as they see themselves being a bravery mentor to Mum or Dad!

Superpower point:  Trying new things with our children that have no guaranteed outcome lets them enact bravery with us.  Allowing them to watch us feel somewhat anxious about an undertaking but do it anyway underscores that we don’t need to be 100% confident to act with bravery.

This article about bravery has highlighted these points:

How to Raise a Brave Child | Superpower Kids

The Powerful Effects of Building Resilience in Children